I downloaded a copy of Desk last week, an OS X applications that is designed for bloggers by bloggers. It costs $30 from the Mac App Store, which is in line with other blogging software for OS X.

To cut to the chase, I like the application but, as it stands right now, version 1.0 feels like it’s just barely out of beta. As a result there’s no way that I could recommend that anyone purchase Desk until a series of important bug fixes are implemented.

I write in Markdown. At this point it’s so engrained in how I stylize my writing that even my paper notebooks (yes, I still use those…) prominently feature Markdown so I can understand links, heading levels, levels of emphasis, and so forth. Desk uses Markdown and also offers a GUI where, after highlighting some text, you’re given the option to stylize add boldface or italics, insert a hyperlink, or generally add in some basic HTML. That means that people like me (Markdown users) are happy as are (presumably) those who prefer working from a graphical user interface. Everyone wins!

In line with other contemporary writing applications (e.g. Byword, Write) the menu options are designed to just fade away while you’re writing. This means there are no distractions when you’re involved in writing itself and that’s a good thing. You always have the option to calling up the menu items just by just scrolling somewhere in the main window. So, the menu is there when you want it and absent when you’re actually working. Another win.

Let me talk a little about the setup; when you install the application you’ll want to link it up with some of your social networking/content management platforms where you post your writing. In my case, I hooked it up to Tumblr and to a self-hosted WordPress installation. Tumblr was easy-peasy. WordPress was not.

Whenever I tried connecting to WordPress I received errors. Desk offers some common ways to resolve nsxml parse errors and provides some details to share with your hosting provider so connection errors can be fixed.

So, even though Desk might have some issues connecting to your WordPress site the company has identified, and provided solutions to, the most common problems they believe you’re likely to run into. A preemptive win (but only sort of, as you’ll see in the next section).

Some other aspects of Desk that are appreciated include: a character counter along the bottom of the window, along with a word count and a ‘time to read’ counter. I admit that I’m not really certain how accurate that last counter is but it does serve as a rough gauge: is what I’m writing going to take way too long to read, or is too short, or just right? So some win there, too.

Given that this is a version 1.0 release there are, however, a lot of rough edges that needed to be filed away before people should purchase the application unless they want to be on the bleeding edge of blogging applications (if such an edge exists!).

Most people who write online have breaks between their paragraphs. It’s rare to see someone tabbing-in each new paragraphs. As a result, writing applications are at their best when they can show breaks between the paragraphs being written. Currently Desk doesn’t add any space between paragraphs which means that it can be challenging for authors to see where one paragraph starts and another ends.

That’s something that needs to change if Desk is to be used by people who write longer-form pieces (like me). It’s on their development roadmap so hopefully the next update will resolve this particular issue.

Another problem has to do with the line of text that you’re writing only being half-visible; it doesn’t occur all the time, but it happens often enough to be annoying to myself and others. I can’t reliably replicate the problem but know it comes up too often and has the effect of forcing me to move the cursor around and, thus, stop writing. Not ideal. 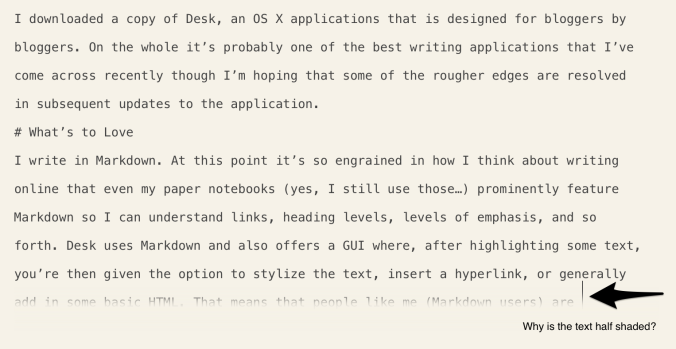 One of the weirder issues I’m having with Desk relates to inability to highlight large sections of text using the keyboard and trackpad. It’s pretty normal for me to place my cursor at the front of one word, move the cursor to another part of a paragraph using my trackpad, hold down on shift and then select the whole bunch of text at once. But I can’t do that in Desk and I have no idea why, though I know it’s pretty frustrating to have to retreat to the keyboard to select the text in question. And I’m not the only person to have some across this bit of weirdness.

While Desk does use Markdown it doesn’t have all the features included in other clients. For me, the key one that’s missing is the ability to add footnotes. Fortunately that issue has already been flagged as planned for inclusion in a future update. No indication, however, whether there will also be an option for the Desk menubar icon to be a flat black image instead of the current colourful one…

Arguably most significantly, while Desk does offer support for resolving common problems in connecting to your WordPress install the provided solution isn’t always enough. More to the point, the solutions didn’t fix my own problems connecting to this website.

Desk’s support page states that the ‘API URL’ field you fill out when configuring a WordPress site should point to where the xmlrpc.php file is located. The page does not state you should include the filename itself.

I found that I had to have the full directory path and filename (e.g. https://wwww.christopher-parsons.com/%5BInstall directory]/xmlrpc.php). I don’t know if this is an oddity of my site or because the site is secured using SSL. Regardless, Desk’s support currently doesn’t instruct users to point directly at the file. Hopefully they’ll update their official support page to include this particular fix or, alternately, get a connection wizard running that’s as smooth as Byword.

Lastly, there is a known issue with uploading images via Desk to a self-hosted WordPress install.[1] Even after connecting to my WordPress installs I’m unable to publish posts that contain multiple images inline. The developer knows and is planning to fix this behaviour this but it functionally means that Desk currently offers no serious advantage over other clients such as Byword

So, would I recommend desk? At the moment I wouldn’t because of the bugs and limitations attached to the application. This puts me in direct contrast with others who have reviewed and recommended it (including Apple!). As far as I’m concerned, the application just isn’t ready for primetime for most people who publish to the web. But I really like the writing environment. And I think that the developer is very serious in fixing the bugs that I’ve noted, above. But currently Desk costs $30 and doesn’t work well enough for me to use it. I began writing this post in Desk. I ended up actually writing it in Byword after running headlong into problem after problem with Desk.

Moreover, Desk doesn’t currently have a mobile version which means that you’re stuck writing on your desktop/laptop. That’s not a problem for me but others might prefer to look at something like Byword if mobile/desktop integration matters to you.

Ultimately, I like Desk. And I’m looking forward to seeing what it turns into over the coming patches. That I like the application is weird for me, personally, because I typically despise blogging clients – they’re convoluted, have poor integration with multiple platforms (like WordPress), lose posts, or have other deficits that make them more trouble than they’re worth. There are a lot of deficits in Desk right now but they can be fixed and, once they are, it’s probably going to be the best OS X blogging client I’ve used in the past decade. I just can’t wait until version 1.1 finally makes the application usable to writers such as myself.